The Central Business District is a beehive of construction activity, with heavy equipment clogging streets and flagmen directing traffic on many blocks. The pace of development is perhaps more brisk than it’s been at any point since the oil bust of the 1980s left many of the neighborhood’s new office towers vacant.

Take the four-block stretch of O’Keefe Avenue starting at Canal Street. The 14-story Oil and Gas Building, mostly vacant for more than a decade, is slated to become an upscale Canopy hotel, a Hilton boutique line. Across the street, a Moxy hotel – a Marriott brand targeting millennials – is set to open in April on the site of a former Quality Inn. Farther down, two buildings that once housed the city’s utility company will become a 200-bed luxury hotel.

Just a block away toward the lake, on Loyola Avenue, the century-old Pythian building – the former hiring office of renowned boat builder Andrew Jackson Higgins – is being renovated into a mixed-use development with 20,000 square feet of retail and office space and nearly 70 apartments. 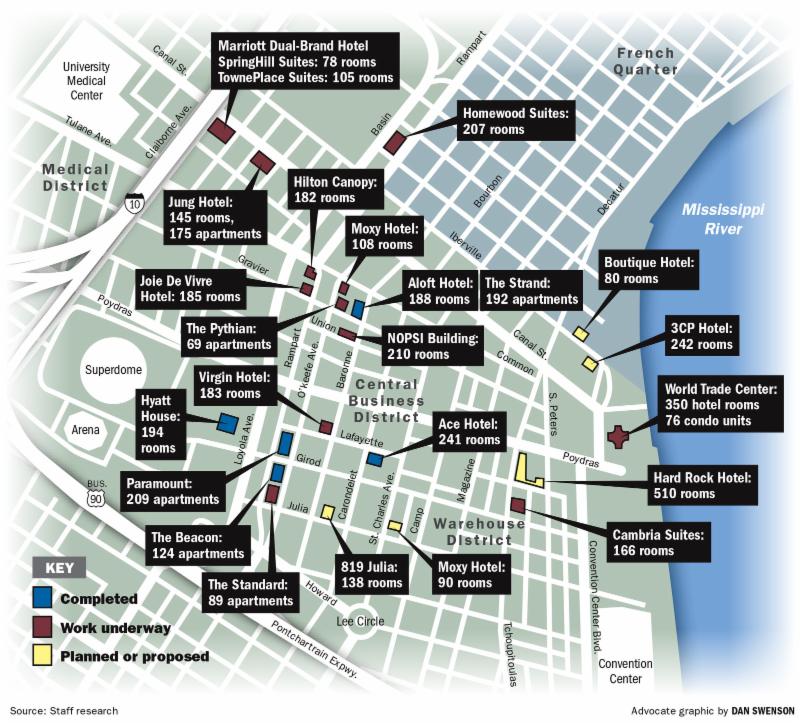 It’s all part of a wholesale makeover that is seeing the district, once the beating heart of the regional economy, undergo a transformation into a more residential neighborhood populated by both full-time occupants and tourists. Many of the new living units are conversions of historic office towers that have been empty for years.

All told, more than a dozen hotel projects, valued at nearly $1 billion, are proposed or under construction in the CBD, which will add about 2,330 rooms to the inventory of about 25,000 rooms in and around Downtown. That’s an increase of nearly 10 percent.

As for residences, nearly 1,000 new apartment or condo units are just completed, being built or in the works, a sharp uptick from the hundred or so units that typically are added to Downtown’s supply each year.

Commercial developers and real estate brokers say the Downtown boom began in 2010 and has accelerated in the past three years. They see several forces driving the hot market: pent-up demand after a wave of post-Hurricane Katrina development slowed; New Orleans’ vogue as a tourist destination; generous federal and state tax incentives that subsidize the rehabilitation of historic buildings; and an increased demand for center-city living that is reflected in cities around the country.

“We’re foreseeing a growing residential base Downtown,” said Kurt Weigel, head of New Orleans’ Downtown Development District. “This is not a short-term thing.”

Indeed, the Central Business District’s residential appeal – among both renters and homebuyers – has been growing slowly but steadily over time. The neighborhood added almost 500 occupants between 2000 and 2010, finishing that decade with 2,276 residents, according to the New Orleans-based Data Center. That made it the city’s fastest-growing neighborhood over that span.

While the Data Center hasn’t done a new estimate of residents, the group posted an analysis last year showing the steady growth in the CBD has continued since 2010.

The center’s analysis also found that the largest single group of CBD residents was between 18 and 34 years in age, a proportion that was growing over time. The percentage of homeowners also was rising steeply, indicating a robust demand for condos.

Just like real estate in the city at large – which has been appreciating sharply – prices of Downtown homes have been booming as well. In the CBD, condo prices now start at $300 a square foot on the low end and range as high as $500 a square foot, according to Wade Ragas, a consultant who has tracked local home sale prices for decades.

The uptick results partly from scarcity, Ragas said, with most of the neighborhood’s historic buildings already converted to housing.

“You’re witnessing a vote of consumer confidence in wanting to live in the sort of 24/7 part of New Orleans,” Ragas said. “It is happening all over the country. These high rates of price appreciation are all over the place, and they’re particularly affecting center cities.”

Weigel said he expects prices “will see a flattening” as hundreds of new units enter the market.

“Given the significant increase in rents and occupancy rate Downtown, that’s not a bad thing, to take a little bit of a rest and then continue that upward trend,” he said.

A handful of projects have had a catalytic effect on Downtown’s revival.

The reopening of four historic theaters in the area, for instance, has breathed new life into the neighborhood, especially in the evening hours, when it once felt like a ghost town.

Perhaps no single development has been more crucial than the Rouses supermarket that opened in 2011 on Baronne Street. The CBD’s first large grocery store in decades, the store made the notion of Downtown living more practical for many people considering it.

While it’s not complete yet, the new streetcar line along North Rampart Street and St. Claude Avenue from Canal Street to Elysian Fields Avenue is jump-starting more development downriver from the CBD.

The net effect of all of it is that the CBD is starting to feel more like a neighborhood.

Gary Solomon Jr., 29, president of the New Orleans-based Solomon Group, an entertainment production company he founded, has lived near Girod and Baronne streets since returning home from New York in 2008.

“I wanted somewhere where I could feel like I was in a metropolitan area,” he said.

Between the supermarket, a slew of new restaurants and a new CVS pharmacy, Solomon said he rarely has to get in his car to run errands anymore.

“I think it made it livable, as opposed to feeling like you had to leave your neighborhood or leave your part of town to get basic necessities,” he said.

“It’s more people who have stability or growing careers that are living down here,” he said.

Hoteliers are flocking to the CBD for many of the same reasons as young people and empty nesters. Demand for rooms continues to rise as more and more tourists come to the city. Almost 10 million people visited New Orleans in 2014, nearly reaching the number who came in the last full year before Katrina.

Tourism fell sharply after the storm, of course, and New Orleans didn’t have as much new hotel growth as other similar markets, experts say. Now, developers are making up for lost time.

Many of the builders are big-name hotel chains, propping up real estate values.

The biggest name of all – and the biggest single project – is the $380 million Four Seasons hotel planned for the former World Trade Center building. Tourism officials hope the new hotel will drive demand for high-end restaurants and possibly other top-of-the-line hotels.

The Four Seasons project is being overseen by Woodward Design + Build, which also is building a $30 million luxury hotel on the site of the former New Orleans Public Service Inc. building on Baronne Street.

That project is one of many in the CBD’s revival to benefit from generous state and federal tax incentive programs that subsidize downtown redevelopment.

Since 2002, Louisiana has offered a 25 percent tax credit to spur commercial redevelopment of historic properties in downtown areas. The break can be combined with a 20 percent federal tax incentive, meaning the government essentially picks up 45 percent of the tab of eligible projects. The developer must front the money for the project, but refunds come in the form of a check at tax time.

Whether or not the program is sound public policy, and whether or not it’s driving development decisions, it certainly is being used. In 2014, Louisiana ranked among the top four states in rehabilitation activity, according to the National Park Service, which oversees the federal program.

The state credit is set to sunset in the coming years, dropping to 20 percent in 2018 before disappearing by the end of 2021. A total of 50 downtown projects – worth a combined $433 million in investment – have benefited from the state credit over a five-year span beginning in 2010, according to state figures.

New Orleans is a prime candidate for such work due to its trove of historic buildings, many of which have sat vacant for a decade or more, the former World Trade Center among them.

“The city remains, in many ways, a poor city,” said Bradshaw, of Green Coast Enterprises. “We just didn’t have the calls to go around knocking buildings over. Now, we have this beautiful, historic downtown building stock that, when you renovate and put it back into commerce, really is able to capture people’s imaginations.”

Many local developers, including Woodward CEO Paul Flower, believe it won’t be long before the city’s supply of development-ready historic buildings is tapped out. But once the well is dry, Flower expects some new buildings will rise on empty lots – but the extent of new activity may depend on the availability of tax incentives similar to the historic preservation program.

One major project that has sprouted where no building previously existed is the South Market District, a $200 million mixed-use project that will, when complete, take up four blocks in Downtown.

The 209-unit Paramount, South Market’s first phase, is complete; it was leased up in less than five months, according to Matt Schwartz, co-founder of the Domain Companies, the project’s developer. Pre-leasing is now underway at the Beacon, which has 124 apartments and 20,000 square feet of retail space. Rents there start at $1,700 per month for a one-bedroom apartment, $2,300 for a two-bedroom and $6,500 for a penthouse.

While the project didn’t qualify for historic tax credits, South Market District was eligible for more than $2 million in federal New Markets Tax Credits, among other government incentives.

A few big plots of land remain undeveloped. Perhaps the biggest is a  47-acre stretch of vacant land near the Mississippi River, in front of Mardi Gras World. Among other ideas, developers have proposed a large hotel, residences, a performance venue, a conference center and a “cultural campus” for research on the site. No project has been selected for the site, which is owned by the state and governed by the Morial Convention Center’s governing authority.

There’s also the former Charity Hospital building, which occupies nearly 1 million square feet on Tulane Avenue at the CBD’s lakeward edge. Former Gov. Bobby Jindal’s administration spent much of 2015 soliciting ideas on what to do with the facility, closed since Katrina.

Last year, the state received five responses to its request for “creative and innovative redevelopment ideas,” including one from developers who offered to buy the building and others from groups proposing to renovate it and lease the space. Proposals ranged from a mental health clinic to combinations of retail stores, apartments, a hotel and a biomedical facility.

The state is expected to hire a consultant to help arrive at a decision.

Weigel, the head of the Downtown Development District, said the neighborhood is ultimately “constrained” by the ongoing uncertainty surrounding the Charity site.

“We, as a group, collectively have got to find a solution to that,” Weigel said. But he noted there is “strong demand” for the building – which isn’t a bad problem to have.

“It’s not like we’re trying to redevelop a building and we don’t have demand for the space,” he said.